4 Women Who Work Across the Language Barrier 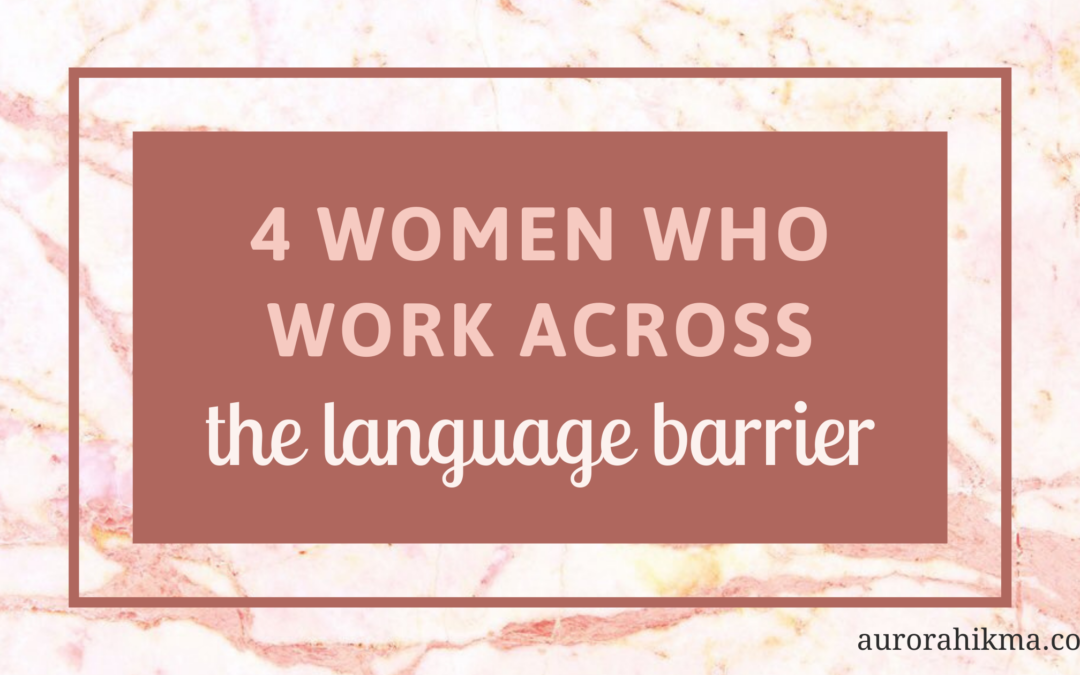 In celebration of International Women’s Month, we spoke to Arab women who cross the language barrier at work every day. These four remarkable businesswomen in the UAE work in various industries: consulting, publishing, events, and F&B. We discussed everything from favorite Arab figures to identity crises while growing up.

Identity Crisis: How Arab are You?

Lara Khouri is the founder of there is no spoon, a customer experience consultancy. She is Lebanese by way of Palestine and grew up in Nigeria during the 80s. Her experience with identity crises is complex: “When we moved back to Lebanon in 1993, things got very confusing. I didn’t speak Arabic well, nor did I understand Lebanese culture well. The implications of what it meant to have grown up in Beirut during the war escaped me. To 14-year-old me, it felt like the Lebanese didn’t consider me Lebanese. Once I had learned, mainly through osmosis, enough Arabic to be a passable Lebanese, I started having some semblance of Arab identity. That identity was solidified in my late 30s when I started referring to myself as Palestinian.”

On the other hand, Aisha Bin Brook, the founder of Treat Me Gluten Free, is an Emirati national. Her parents, who never went to school, speak English fluently. She doesn’t feel like speaking English has affected her identity much. “Being in Al Ain, we don’t have many expats compared to Dubai, for example. My expat friends are very much into Arab culture that I feel I’m teaching them more than practicing my English.”

The founder of MagLev Events, Dina Alaa, is an Egyptian whose first language is Arabic. She didn’t learn English until much later in life. She faced no identity crisis whatsoever, it just “took some time to get used to [speaking English], but now it’s totally fine.”

Haifa Malhas is the founder of Hobb Studio and Hobb.ae, an independent online bookstore. Her background is very interesting, as a Kuwaiti-Palestinian, but her struggles with identity were nothing to do with language. “We are all multi-faceted, and I’ve accepted that I’ve always been the odd one out. That’s mainly due to political and cultural reasons though. I struggled with what type of Arab I am when I was a child. However, as I grew I found that the definition of who I am depended on the context. My struggle came from others trying to label my identity as Kuwaiti, Palestinian, expat, or “children of Kuwaiti mothers”. At 36, I’ve become desensitized to all the labels, and I don’t like falling into stereotypes or overgeneralization.”

Our interest lies in learning about what other bilingual Arabs use English for. Haifa, for example, uses English with her Arabic-speaking friends and family only when terminology isn’t available in Arabic. Topics she now follows online in Arabic to pick up terminology include creative industries and parenting.

Lara and Aisha are quite similar in the usage of English for terminology with people who prefer speaking in Arabic. However, they also use it to express emotions that are more detailed than the broader words used in everyday Arabic.

At work, Lara, Aisha, and Haifa translate from English into Arabic often. Lara faces two challenges. One is knowing which dialect to choose when doing customer service training workshops in Arabic. The other is in translating the meanings of certain phrases. An example she mentioned has to do with the fact that there are no capital letters in Arabic. She has a presentation about what she calls “values with a small v” and “Values with a big V”. This is especially hard to explain to Arabic speakers who don’t understand the significance of capital letters in English.

Aisha struggles at work with terminology too. Because there isn’t enough information in Arabic focusing on gluten-free diets, she relies on her translations of English medical information. Additionally, she started a blog on her website about the gluten-free lifestyle in Arabic, as well as a Facebook group.

Haifa, on the other hand, struggled with the quality of the Arabic work she encountered. She has seen everything from mistranslated content to rigid literal translations to broken sentence structures in books, publications, and ad copy. Usually, she schedules twice the time to revise Arabic books compared to English ones, as they contain more errors in grammar, spelling, and punctuation.

Dina’s struggles as a bilingual at work are more to do with the English side of things. She struggles with the wide variety of English accents in the UAE. Relying heavily on email communication has helped her ensure nothing gets misheard.

Working Across the Language Barrier

Putting everything we discussed in one post will take too much space, so we’re saving the discussions about the future of Arabic in the younger generation for a future post. Let’s end with what these fabulous ladies said about working across the language barrier, as well as their favorite Arab historical and/or prominent figures.

Dina: “Working across the language barrier gave me more confidence. It is not as hard as it seems in the beginning. My favorite Arab is Ibn Rushd because I love philosophy. Although he suffered a lot, he made great changes.”

Haifa: “I always found it exciting to work across the language barrier, as I was sure to learn something. If we all approach it with curiosity, it wouldn’t feel like a barrier. I’ve always loved the writings of Khalil Gibran, perhaps because he traveled between languages often and I’ve enjoyed reading his writings in English and Arabic.”

Lara: “I’m privileged to be able to work across the language barrier both ways. Not only does it mean that I’m constantly learning, but it also means I’m able to move knowledge, the richness of cultures, and the beauty of different languages through that barrier to people on either side of it and contribute to their learning and growth. My Arab hero growing up was Elissa, Queen of Carthage who had negotiated for a piece of land for her and her people and was, eventually, told that she could have a piece as large as that which an ox-hide would cover. I remember thinking how smart she was to have the idea of cutting up the ox-hide into thin strips so that it would cover a greater area.”

Aisha: “Learn the languages of others without forgetting your own. Knowing English — as it’s an official language of the UAE — will open many doors and opportunities to improve your business within the UAE and abroad. For me, the most inspiring Arab is Sheikh Zayed. His kindness to all and generosity is like no other, and his ambitions to convert the desert to green land despite everyone’s disapproval is remarkable.”

Participate in Our Posts

We want to do more of these opinion posts. If you’re curious about anything related to Arabs, translation, doing business in the UAE, or being a third-culture kid, reach out to us and we might answer with a blog post. Additionally, if you would like to contribute to a future blog post or write a guest post for us, don’t hesitate to contact us.

This site uses Akismet to reduce spam. Learn how your comment data is processed.