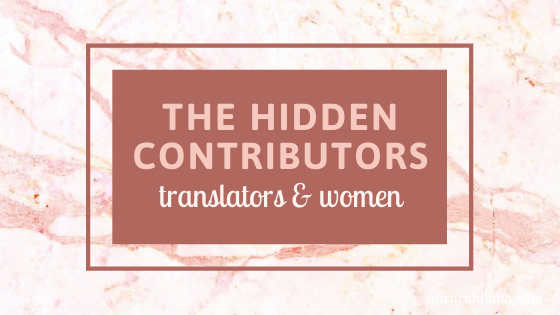 For a long, long time, throughout history, there have been very little women who were acknowledged as contributors to society in general, and the advancement of knowledge – both scientific, secular knowledge, and religious, spiritual knowledge.

Today, one of the most famous examples of women who received little acknowledgement to their contributions to the advancement of secular knowledge is Hedy Lamarr, whose work on a radio guidance system for the Allied forces’ torpedoes has contributed to the principles behind Bluetooth and Wi-Fi technology. However, she was well-known for her acting, rather than her inventions, for a very very long time. There are many other women who were part of teams in which only the men went on to receive Nobel Prizes, leaving the women out.

Similarly, women have rarely been acknowledged as contributors to religious knowledge. Personally, I can speak for the reading I’ve done in terms of the history of Islam and Islamic knowledge, and even though there are quite a lot of contributions made by women, few of them are acknowledged. Instead, a lot of emphasis is placed on women’s roles as mothers of famous male scholars, as if the only contributions Muslim women have made to society is in giving birth to and raising men.

So today, in honor of International Women’s Day, I wanted to acknowledge a few female translators whom I’ve read about, who have incredible stories, or simply have made interesting contributions to the world in general, and translation in specific.

Marta is a translator who works from English into Polish, and has extensive experience in business-related translations. One of her many accomplishments include running an online business course for aspiring freelance translators, Business School for Translators. She no longer runs it as of last year due to the amount of time it took her to do it, but her blog archives are filled with information and advice that I myself used when I was starting out as a translator.

Emma is a translator who works from French into English, and regularly translates novels and other literary works. Many authors whose works she has translated hail from Morocco. She also is the co-owner of a bookstore/bar/coffeeshop, a very interesting combination, and similar to fantasies I had when I was younger of a place where books, coffee, and sugar-filled desserts were served together!

Sahar is a translator who works from English into Arabic, and has a lot of experience with children’s literary translation. In fact, it was she who translated the sixth and seventh books from the Harry Potter series into Arabic. She also contributed to editing the translation of Harry Potter and the Philosopher’s Stone, the first book in the series. While I haven’t had the honor of reading her work, I did feel a connection to her due to the fact that I have experience in translating science fiction, which is very closely related to fantasy!

So there we go! Three women from very different backgrounds, with very interesting experiences and contributions! How about you, who is a woman in your field whom you think should be highlighted on this day? This blog post is part of #girlpowerhop, a blog hop hosted by Aurora Hikma, in honor of women worldwide, on International Women’s Day. Click this link to read the rest of the posts!